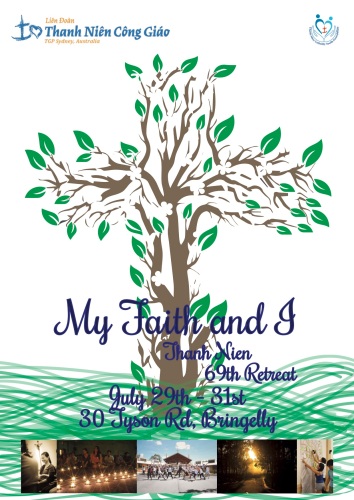 From Friday 29th to Sunday 31st of July, Thanh Nien held its 69th retreat at Bringelly.

With a 7pm meet up, the place began to hum with life as participants; both old and new, came through the front doors with all their luggage.
Music filled up the foyers and a sense of belonging had already started settling down into the place that we were going to call our home for the next 3 days.

Introductions were made casually between everybody without a formal agenda and so this set a comfortable atmosphere for everybody at the retreat. As we congregated in the Good Shepherd Hall with voices of excitement and awe, the leaders formally introduced themselves and explained that each of us had been randomly allocated to a group.

As we dispersed to discover the members of our own group, little did we know about how close we would all become over the course of 3 days.

The food was deliciously prepared by a few of our mothers, and breakfast was taken care of by the leaders. Over our bacon and eggs, bun bo hue and secret midnight snacks, we all bonded together.

There were many activities, but the most vivid one was the amazing race. In our groups, we had to complete a series of activities and riddles to receive clues for the next station. It was a very enjoyable game as it tested our skills, teamwork, physical stamina and team spirit.

Throughout the retreat, we had mass. However mass was held differently compared to a traditional mass that we regularly go to every Sunday. It was unique as we were all encouraged to not only participate by responding but participate by doing something as a whole community. We held hands and formed a circle along with Cha Chi, we were seperate individuals linking hands to become united as a community in faith. The way in which we received the Body of Christ was more intimate as we all held Jesus in our hand together, talked to Him together and took Him into ourselves together.

Cha Chi, Cha Ho and Cha Lam came in as guest speakers to discuss with us topics that were contemporary to our time in terms of our faith. We spoke about what challenged our faith and what changed it. We also focused on what can we do for God, instead of what He can and would do for us. As a group, we looked at both sides of the coin; not just the good, but also the bad.

As a whole, we opened up our attention to what others may have turned a blind eye to and this broadened up our perspectives of how we personally understand our own faith and religion. A sneak peak into what we spoke about in terms of challenges to our faith was the contradiction between science and religion. From this, we learnt that science and religion can co-exist together as the stronger one’s faith is, the more they can learn to appreciate science and understand it fundamentally.

Furthermore, we all engaged in a debate about contemporary topics such as same-sex marriage and abortion in the light of every aspect possible, including religion. Through role playing and intense thinking, the debates challenged our creativity and opened up our minds to new perspectives. It allowed us to appreciate both sides of the argument.

Saturday night was an emotional time as we all sat in a circle and shared our stories of struggle and darkness. Tears were shed and tissues were passed on. As a family, we confided and empathised, thus bringing us all one step closer to each other. In addition to this, we all went out in bundles of layers to acknowledge the Stations of the Cross. While holding glowing boxes in the dark, we walked as a unit, and the boys took turns carrying the cross without planning beforehand. It was a moment of giving without hesitation; of taking the burden of the cross with free will.

I know I speak for everyone when say that this retreat had taught me many things. Leaving the gates of Bringelly behind had left me bittersweet but I came out as a new person, with new knowledge and a new sense of my faith. We all learnt about Vietnamese Catholic culture in the form of an engaging narrative and questionnaires with Cha Chi. We had many faith discussions within our groups and strengthened our faith in God as well as our faith in each other. We had fun together through games, food, and the simple notion of spending time with each other.